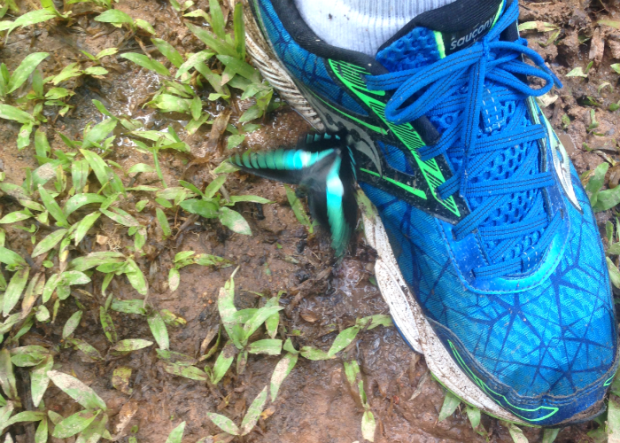 Road to Singapore: Look out for the butterfly

Road to Singapore is a series on the city I’ve lived in since 1997. Sometime in 2015, as Singapore got ready to celebrate SG50 or fifty years of being an independent, sovereign nation, I started ambling through its districts, towns, and wilderness with my walking partner AJ. The idea was to see as much of this small yet vibrant place, get to know Singapore more intimately, a city that rarely fails to astonish me. “Look out for the butterfly” is a part of the series.

That day AJ was very excited. He had spotted a path veering off from somewhere close to his wife’s office in Biopolis; it seemed to disappear at one point, but he’d noticed graffiti and perhaps it was a new road being created for cyclists or something? He had no idea, but he wanted to go and explore, if I agreed.

Among the brand new skyscrapers of Biopolis, in the innovation and entrepreneurial centre of Singapore, it is hard to imagine graffiti, but really, just walk through the spiffy grounds of The Metropolis with its super expensive modern sculptures, go past the Smokers’ Corner, run down the couple of steps leading to a shaded walkway, then look to your right, forget the concrete and jump across the narrow drain onto the green. Before you as you crane your neck a little, runs the overhead track of the MRT, all around is grass, not at all manicured. Broad bladed, light green cow grass and intermittent tracks of mud, appearing and disappearing… to the left, to the right, stretching on. And just over there is writing on a wall, if not the wall.

I couldn’t imagine such a thing could exist, be allowed to exist, so close to the fabulous towers of a city always getting more gleaming, more sophisticated. AJ and I charged down, yeah that sense of freedom when there are no neat pavements, no road signs and traffic lights and predictability… it makes you walk a bit differently. I was of course worried about snakes but AJ was so happy, I decided if a snake came along, he would do something about it – maybe kill it with a beaming grin – I’ll just trundle along and see what we find here. We came to a tunnel like place, there was brilliant paint on the grey concrete walls; loose gravel, boulders, and mud lay on the floor. The images had a break free feel to them,  I wondered if it was all indeed done spontaneously by the young and the restless or was there some “help” provided by people wanting to make the city more “creative.” Obviously some construction was underway. A road? Hope not. Office goers actually were using the tunnel as a short cut. Maybe this is just their way of escaping structure, rigid boundaries. Perfection… order, sometimes they can be so tiring.

As we walked ahead, we could see this was where a railway track lay at one point. Was it the same track we’d seen near Sunset Way on a previous walk? Jurong Railway? only here, the track had been taken out, leaving just the marks along the grassy land.

A sense of nature hung around, unhampered. Very curious, considering on one side were several HDB blocks (Ghim Moh) and steel and glass high rises (Biopolis) and on the other, residential estates, streets and roads (Commonwealth Avenue) sometimes visible through the foliage.  Yet it was as if this path of grass and mud, with lush vegetation bordering it, was set apart from it all… it belonged to another time, another place. There was a silence here a city rarely has… and the way just called you to walk. You didn’t bother to ask, So where are we going? You walked, you rambled, you took the next step. There were lots of wet, muddy patches, the rains had started already. My pretty new blue shoes turned a horrid shade of brown soon.

Maybe that’s why the blue butterfly fell for AJ’s shoe.

For some reason, his trainers were not muck spattered like mine.

But to get back to the blue butterfly. I read later it’s called Common Bluebottle (Graphium sarpedon), a species of Swallowtail butterfly, and is found in South and South East Asia, even eastern Australia. I can tell you there was nothing common about this creature though. The butterfly was flitting about on the grass lost in some unknown pursuit. As we walked up to it, it started to play with us, dancing and floating around.

Such a lovely winged one with its streaks of iridescent turquoise and cerulean edged by black, and gliding about merrily, we had to stop and stare and try to get some shots.

Soon it had homed in on AJ’s shoe. Coincidentally, it was nearly the same shade of blue as the butterfly; also bright and inviting. Did the Swallowtail recognize the colour? Did it think it was an old friend in a new form? No idea, but clearly there was a relationship building there.

The butterfly would fly in, sit on the shoe, flutter its wings, flit off and circle and come right back again.

We stood there absorbed in the play. How, I wondered, the butterfly knew it had to stick to this narrow green path and not lose its way in the city all around. Where was its home? Had it flown along the same ex railway track from wherever it lived, perhaps on some cinnamon tree in a distant wood or forest?

The path ahead had no name, not one we knew of at least. On one side back gates of houses opened onto it. Gave the homes some breathing space maybe. We passed a fallen tree trunk covered with mushrooms. There were hardly any people. Till a group of about ten men came from the other side… they told us this was part of the Bukit Timah track. They were in their forties/fifties, possibly avid walkers along such trails. We plodded along amiably like travelers on an uncharted land. On the way back, we saw the blue butterfly again. Had it been waiting? The moment he (female butterflies don’t have such bright colours I read somewhere) spotted his favourite shoe, the game began in earnest.

Later I heard this stretch is called the green corridor… AJ and I had joked about the path getting “civilized.” All paved and marked with neat signs, a board by the side giving the history of the KTM railway line, etc. I know we’d both hoped fervently that wouldn’t happen. Maybe the butterfly was staking the place out just to make sure all such plans by humans were foiled. The Green Corridor runs right across the island, from the Tanjong Pagar Railway Station in the south to the Bukit Timah Railway Station and right up to the border of Malaysia in the north. Once this was the beginning of a railway network that was to extend up to Russia. It’s a continuous, uninterrupted stretch of greenery and woodlands winding through the city. Concerned that development will take its toll on this remarkable part of Singapore, citizens have spoken up against it and raised awareness. I notice the map plots it as a dotted line and it’s called, The Greenway. You can read more about the Green Corridor here: http://www.thegreencorridor.org/ The Smokers’ Corner with its “yellow box.” The MRT track overhead where you get off the concrete and onto the grassy stretch.