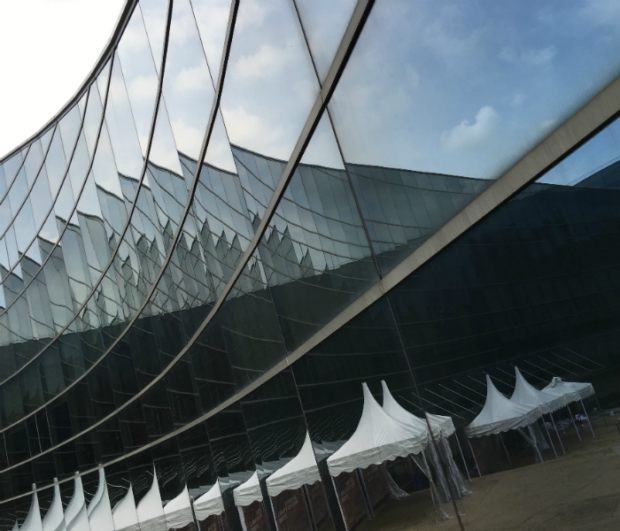 Road to Singapore is a series on the city I’ve lived in since 1997. Sometime in 2015, as Singapore got ready to celebrate SG50 or fifty years of being an independent, sovereign nation, I started ambling through its districts, towns, and wilderness with my walking partner AJ. The idea was to see as much of this small yet vibrant place, get to know Singapore more intimately, a city that rarely fails to astonish me. “A campus ramble” is a part of the series.

There have been students around here for a long time, but they weren’t always from the Nanyang Technological University. I realised this only now as I started to look for the history of this massive campus on the south western side of Singapore, beyond Jurong West.

The skies were particularly blue and the sun was high on our heads, hot and unkind, the day AJ and i went for a walk at NTU, as it’s called. I was intrigued by the coat of arms on the gate. A shield, a lion, and even the signs of battlement, but instead of arms, a cogwheel and atoms on it. Very Brit it looked, not really Singaporean at all. Seems when NTU was founded, it adopted the coat of arms granted to its predecessor the Nanyang Technological Institute by the College of Arms of the United Kingdom as its own coat of arms. NTU is one of the three major universities of Singapore and has grown beyond technology and science to offer a complete range of disciplines. Its Materials Science and Electrical and Electronic Engineering programmes rank among the global top ten. Its MBA programme is one of the best in the region. Its School of Art, Design and Media is this gorgeous building that had us clicking our phones fast and fascinated. The roads here slope up and down and wind between old and calm looking buildings and new and energetic architecture. There’s greenery all around and for two people who haven’t a clue about the campus, lots of place to get lost in. There weren’t too many students about, summer break has already started. We traipsed around only in one part of the campus, for just about an hour, and came away with the impression that it was smaller than the NUS campus.

The 200-hectare Yunnan Garden Campus of NTU is the largest university campus in Singapore. NTU was created in 1991 by merging the Nanyang Technological Institute and the National Institute of Education. The idea was to create a first rate technology and science focused institution, I guess, that would produce students who could compete with the best in the world. A tall and sparkling structure by a row of fountains made me stop and squint up at it. It had a curious bundle of spheres on top, each one reflecting the sun. While I can’t say I loved it, there was something about it, like it meant to be noticed. “The Wind and Wings” is a stainless steel sculpture by Yeo Chee Kiong. NTU was the home of the world’s first Youth Olympic Games and the sculpture commemorates that. The glittering globules are called the “butterfly blossom”.

While I enjoyed the walk, I sensed a sort of sadness in the air. Which is strange, considering I know nothing about the place. Yet the feeling stayed lingering.

Searching for information on NTU later, I came across pictures of old oriental looking buildings… gates, towers, Chinese characters on the grass… we had seen none of these. I said to AJ, we had go back for another walk.

I also read about the Nanyang University… Singapore’s only Chinese language univ, which existed from 1956 to 1980, and was based here. It was the only Chinese university outside China and Taiwan. Nantah is how it was called, a Mandarin abbreviation. The closing down of the university was resisted by many and hurt deep sentiments. Even now there are conversations and arguments about it. Nantah was dear to people, one’s own language and culture are always precious. I have myself gone through the tensions between learning in my mother tongue Bengali and English. My first two years of formal schooling were at the Gokhale Memorial Girls’ School in Calcutta, which was founded in 1920 by the progressive Brahmo Samaj. We were taught all subjects, including Mathematics, in Bengali up to class six. Class seven onwards, the medium of instruction switched to English. My father was very keen that I learn both Bengali and English; and that I go through Bengali medium education for some time to get a good grasp of Bangla. Later, I studied in Delhi, where I learned Hindi as my “second language”.

Over time, I have started considering not only Bangla and Hindi but also English to be my own language. English has been spoken in my country for more than three hundred years, at some point one has to own it. And yet, I am grateful for those initial years of Bengali medium schooling. Also my Hindi learning.

I suppose after years of being colonised, the notions of what’s one’s own and what isn’t get a bit mixed up. And there’s this competition between what has been part of one for centuries and what is beginning to belong. Past and present clash for a place in the future. I chose both… greedy as always.

Everyone knows you have to learn English, it is perhaps even seen as “superior” in some ways, which could simply be because it was the ruler’s tongue (I am only guessing). The question is, what place should be given to the “mother” tongue… in one’s life, education, experience. How would one make sure, while getting to be good at English, one doesn’t lose one’s original language.

i don’t think the fear is unfounded, many languages and along with it ways of life are getting lost.

My husband’s family – they’re Baghdadi Jews – came to India from Baghdad in the late 1800s and over time the Arabic dialect that the Jews spoke disappeared, no longer a part of their expression. The Baghdadi Jewish way of living is remembered in certain foods and ways of praying and not much else…

I learnt as I lived with him, migrant communities feel especially strongly about their language and culture, and when time and circumstance allow them to celebrate these, they really enjoy getting into it.

Nantah will remain an emotional issue. I believe there is a move to rename NTU Nanyang University, though that may not happen soon. Nanyang… Chinese: 南洋; pinyin: nán yáng; literally means southern ocean. From Wikipedia i learn, it’s the Chinese name for “the warmer and fertile geographical region south of China, the area otherwise known as ‘South Sea’ or Southeast Asia.” The word gained currency since the ethnic Chinese migrants in this region used it while referring to themselves.

Apart from clean and green and shine, gleam, patina… NTU campus has an invaluable thing. atmosphere.