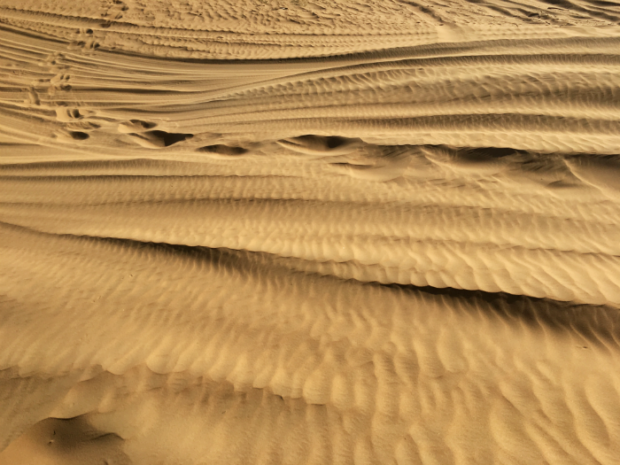 Have you ever felt sand slip away through your fingers? As though it had a will of its own? As though your grasp meant nothing, it had no power over tiny grains of earth on a merry spree of their own?

I was in the Arabian Desert recently. Well, I was not deep in the bare and barren ancient terrain, we were right next to Dubai, actually; not even an hour away from the gleaming, ultra modern city centre and its carefully tended patches of brilliant hued petunias, green verges alongside avenues, palm trees, dancing fountains… almost a negation of the desert that was never too far away, now that I think of it.

We had gone for a dune bashing and desert safari trip. The sort of thing you hear of the moment a holiday in Dubai is mentioned. It’s what most tourists end up doing I imagine. The day was bright and sunny, our taciturn Egyptian driver picked us up from the hotel at 3pm. There was a Russian family already in the car. I’d expected the tackiness of the range rover interior with its reinforced padded bars, the mandatory stopover for tea at a roadside shop laden with truly kitschy made in China souvenirs, the crowd of dune bashers with their cameras and iPhones ready, and the fairly scary, utterly traffic rule free dash upon the sands: now up, now plunging down, now going sideways, now jerking and heaving off in some unknown direction. I hadn’t expected the sand would come and get me the way it did.

The driver put on blaring Arabic music, the Russian mother and daughter swayed and waved their hands to the beat, we squealed and gasped and made it through the bashing. Then we stopped for a spot of photo taking, almost a dozen range rovers in all. The sun blazed, people spilled out of the cars and ran about on the sand, posing, clicking, some lay down, some strode away searching for their own stretch of desert.

I was taking a video with my phone, when I grabbed a handful of sand just to get a feel it. Instantly, the grains began to fly out of my grasp, slipping easily through my fingers. I tried to catch them, but, no, they careened off. Grazing lightly against my finger tips, a zippy energy in them.

It was a strange sensation. One I’d never felt before. I found myself wanting to reach the sand, get closer. It seemed to know things, things that were important, secrets… eternal, essential.

Later, in the camp, where we’d all been herded for food and entertainment, I sat on the black and red striped cushions on the floor, and let the desert reach me. Tourists kept arriving, there was noise all around, dune bikes and camels and a blindfolded hawk lured the crowd. A soporific voice wafted out over the loudspeakers promising happy hour treats, people munched on roasted corn, potato fries on a stick; they tried on belly dance costumes; they drank tea and soft drinks; children played on the large circular stage in the centre.

And the sun dipped gently in the sky, the wind grew warm, bands of pink and purple began to colour the horizon. Cutting through all the noise and transitory things, came the presence of the desert. It captured my thoughts and took me far away, to things that need to be visited, need to be known. Things that you discover as you go along. There’s no hurry, no rush to get it now, be first, but it is compelling, you need to go there.

I thought, I guess you had to come to a desert to get certain answers.

I also realised, you can’t scam the desert, or reduce it in anyway, even though you parcel it in manageable bits and sell it off as tourist ideas. There’s nothing tacky or kitschy here. Only a magnificence, a grandeur… and a journey into who knows where.

All that’s humanity seemed melded in the sand. I wondered, if the desert… nature… would save what’s human in us. 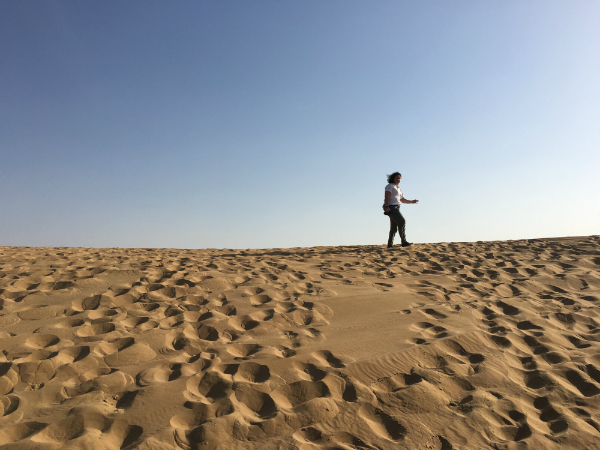