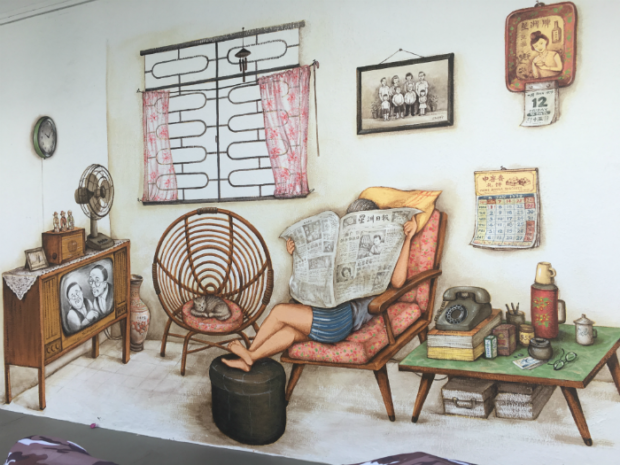 Not knowing can be a good thing

While walking the other day, I saw something I’d never expected to, for I didn’t know it was, or even could be, there. It was a delightful moment of complete Unblock. I wrote about it in my Road to Singapore series; would like to share that with you here.

CURVES AND MORE IN TIONG BAHRU

It was a painting on the wall that we happened to come across, we had no idea it was there.

We were walking in Tiong Bahru, a neighbourhood that’s been around a long long long time. It’s one of the oldest housing estates here, in fact. A stretch of beautiful Art Deco buildings, just two- or three-storeys high, painted white or a pale shade whose colour it’s hard to tell, with edgings and borders in dull greens and blues. No tiles, no fancy plaster work, plain rods on the windows, bare cement corridors, plants here and there. The rounded smooth Art Deco look always gets me. These buildings were made in the Streamline Moderne style. Art Deco minus the ornamentation, with an aerodynamic look, long horizontal lines, elegant curves, sometimes a touch of the nautical.

Built by the Singapore Improvement Trust back in the 1920s, these are the precursors to the HDB flats that you see everywhere in Singapore. Now they are conservation buildings.

In the last few years, trendy coffee places, restaurants, book stores and things have come up in the quiet lanes. Tiong Bahru is in. Having coffee and sandwiches at Forty Hands or digging into Pepper Crab at Sin Hoy are absolutely the thing to do. But Mr Loo at Tiong Mahru Market was quite emphatic in his rejection of Sin Hoy. Golden Spoon! He exclaimed with a happy look, then dropped his voice to confide that’s where the price was reasonable, the service great, and the Bee Hoon Crab not to be missed. But before we veer off toward Mr Loo, let’s go back to the painting.

AJ said, we should head left and go to a shrine, I wanted to walk toward the other side. I knew there were interesting places there, though the exact roads I couldn’t recall.

We passed Block 57, a restaurant called Tiong Bahru Club stood at the corner with its retro look, a signboard nearby declared “We need a hero.” It was a men’s grooming salon. Straight ahead was the Monkey God’s abode, the Qi Tian Gong Temple that’s been there since 1938. The Ting Heng Seafood Restaurant sits on the other side of the road, a coffeeshop I’ve been to several times with my colleagues. The food is good, they let you bring along your pet, and during festival time, you get to see the noisy auction and revelry at the temple opposite. We would have absolutely missed the painting had we known our way. For then we wouldn’t have turned back feeling a little confused, we’d have kept walking ahead.

As I neared a turn, I stopped and looked around, wondering if this was indeed the way to the part of the estate I was looking for. It was then that I noticed something on the white wall of the building in front; I had just walked past it. AJ and I went up to check, and there, a few feet behind the orange mesh put up by the guys doing some construction work, on the wall along the corridor was this beautiful mural. A man lounged hidden behind his newspaper, his legs crossed, he wore shorts and seemed to be in no hurry to move. beside him sat a lazy cat on a chair. All around lay the room with its fascinating details

The wad of notes under the round metal ash tray, the tin of cigarettes, Axe Oil… that table could be from my grandparents’ home or a great uncle or aunt’s home in Calcutta. Instead of Axe Oil, it would be Boroline or something and the cigarette tin would be of Gold Flake. Fu Lu Shou on the Rediffusion radio, the Telefunken TV… don’t know why but i thought of my father’s Grundig tape recorder with spools. The round cane chair, boxes shoved under the table, the telephone sitting on phone directories, the thermos flask, the Chinese news paper… is that LKY, I wondered… everything captured a time. The clock hands are at ten past ten like you see in ads. The calendar pages flutter. And that lepak man lepaks. I have never seen anything like this here, or perhaps anywhere. Of course, paintings on walls aren’t new, but there was something touching about this one. It was fun and yet it had depth, as if the artist was smiling lightly as he painted, his mind constantly searching for things in his memory.

It’s artist Yip Yew Chong’s work, he’s done several murals on things you remember. He is apparently an accountant and doesn’t want his hobby to become his profession…

This one is called  “Home” and it’s painted on 74 Tiong Poh Road; the wall, however, is along Eu Chin Street, which leads up to the Tiong Bahru Community Centre. Eu Chin, Lim Liak, Kim Pong, Guan Chuan, Chay Yan, the streets are named after Chinese pioneers of the nineteenth and twentieth centuries. The place was once a cemetery. In Hokkien, Tiong means cemetery and Bahru is new in Malay. so, new cemetery.

Over the years, Tiong Bahru has been posh, not so posh, utterly forgotten, and now cool and hip. People remember the song birds of this area. In the meanwhile, the future stakes its claim all around. Highrises, both private and  government built, surround the elegant estate. Rents skyrocket. Mr Loo, whose shop I had bounded into upon seeing a porcelain steamer with a rooster, runs a shop selling who knows what all in the Tiong Bahru Market. The kind of shop I wish we had more of. No whiff of brand, no way of categorising. From pin to rooster, it has everything. Also some good advice from Mr Loo. If you want to check whether the porcelain is damaged, lightly clink a porcelain piece against it. If the sound is clear, bell like, all is well. And remember it’s Golden Spoon, not the others.

The painting keeps coming back to me. maybe some day, again not quite knowing I’d find it there, I’ll come across the accountant artist’s work. About 18 years ago we moved to Singapore from India. This is the country’s fiftieth year of independence. Singapore has given me much and I am fascinated by the spirit of this gutsy city state with hardly any land or resources, but oh what dreams and chutzpah (the finest interpretation of the word), the ability to reach big, hunker down and hold and strategise and act and grow. Despite my many years here, I haven’t seen a lot of the island, which started out at only 28 miles by 18. Now of course it’s bigger, thanks to that spirit I spoke of. So I thought why not see Singapore in this landmark year, and celebrate SG50. My friend and trainer AJ and I traipse in different parts of the city every week. Hope you enjoy the walk talk. Because you have a story to tell.