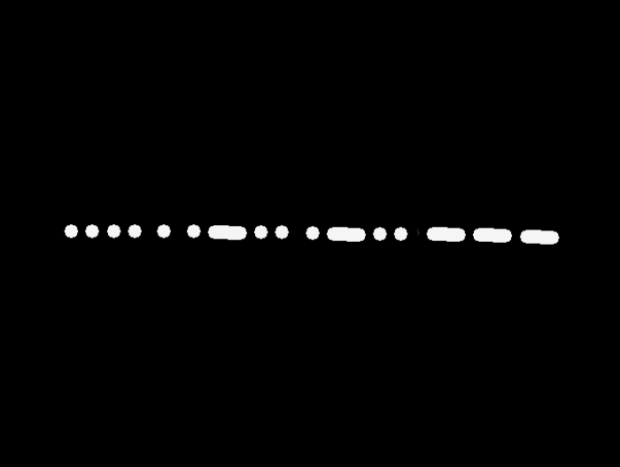 This morning, Twitter took me to an article in The Washington Post, which in turn hauled me straight back to school. 1976… or was it ’77? Grade ten or eleven. We all had to do a National Cadet Corps (NCC) certificate course. It was compulsory. That’s when we heard “dit dit dit dah dah dah dit dit dit” for the first time.

Our instructor was teaching us Morse Code. The dit was a short sound, the dah a long one, there were equal pauses in between. This was the code for SOS, the distress signal recognised across the world. Three dits (or dots if you are writing the code) made an “S” and three dahs (or dashes) composed an “O”. The SOS code was simple, it was meant to be; and it was important to know it, just in case one was ever stranded anywhere, said our stern looking instructor. You could use anything, torch light, yells, markings on the ground, and send out a rescue call. If I am not wrong, they made us tap out the words on a little device, a Morse Code machine of some sort.

Even then, one could see the cleverness of this thing. Samuel Morse had turned alphabets into codes made of bursts of sound, short and long. And you could say what you liked using them. We ran around dit-ing and dah-ing to our hearts content; challenging class mates; feeling superior when someone failed to guess a word; airing our knowledge to people at home.

This must have been the reason we were forced to do that rather dry NCC course, so that one day I could wonder at Morse Code and its real place in our constantly connected world anew. Well, going to the rifle shooting range had been fun, not because I was any good at aiming or anything like that. But a day away from school had to bring joy. And once, I wore two left shoes. Can’t remember why.

The Washington Post article explored an interesting idea. Social Media really began with Morse Code and a message over electric wires, when on 24 May 1844, Samuel F.B. Morse, sent the first official telegraph message ever from Washington to Baltimore. He tapped out on a basic telegraph machine the words: What hath God wrought.

Beautiful words. Prescient almost, if one considers what Facebook, Twitter, Instagram, Snapchat, and whatever is coming our way next, have done – and will do – to us, our world, our ideas, and more. I’m also astounded at the number of dits and dahs that must have needed. God: dah dah dit  dah dah dah  dah dit dit.

This message changed the world of telecommunications, pretty much started it actually. Suddenly, distances were not what they used to be when you wished to communicate something to someone. The message reached instantly. all you had to do was decode it.

Samuel Morse studied science at Yale and was not a college drop out. He loved painting though and became an artist. He had most likely never planned to get back to science, but on hearing about Michael Faraday’s electromagnet (again memories of school invade, instantly, minus wire or even wireless), he was intrigued. As he understood it a little more, he thought one could “send a coded message over a wire.”

In time, working with chemistry professor Leonard D. Gale, he found a way to do just that.

On top of the first telegram ever sent, Morse wrote by hand: This sentence was written from Washington by me at the Baltimore Terminus at 8h 45min AM on Friday May 24th 1844, being the first ever transmitted from Washington to Baltimore by telegraph… Fascinating video here from History.com

Today’s ubiquitous OMG, LOL, ROFL, etc., have their precursors from those days too. The Washington Post gives us a glimpse of the friendship and casual “online” chatting between telegraph operators, from Tom Standage’s “Writing on the Wall: Social Media — the First 2,000 Years”.  Good Morning was “G M”. Guess what “S F D” was?

Wonder what those operators would say if they came across Twitter or Snapchat. Anyway, while Morse did give us the first instant message using electricity, there was Semaphore before that; and other ideas such as people stationed at short distances from where one could see the other and pass messages with hand signals… communicating and bridging the gap has always been important. Even if you weren’t stranded and needed to be rescued.

Just in case you haven’t worked out what the code up there says. It’s Hello.

To get in touch with us, please leave a message here.

The International Morse Code, which has been in use since 1948, is a revised version of the original Morse Code, and is written by Friedrich Clemens Gerke, a German writer, musician, journalist, and telegraphy pioneer.

Material for this Unblock post is drawn from The Washington Post, History.com, Library of Congress, and Wikipedia.